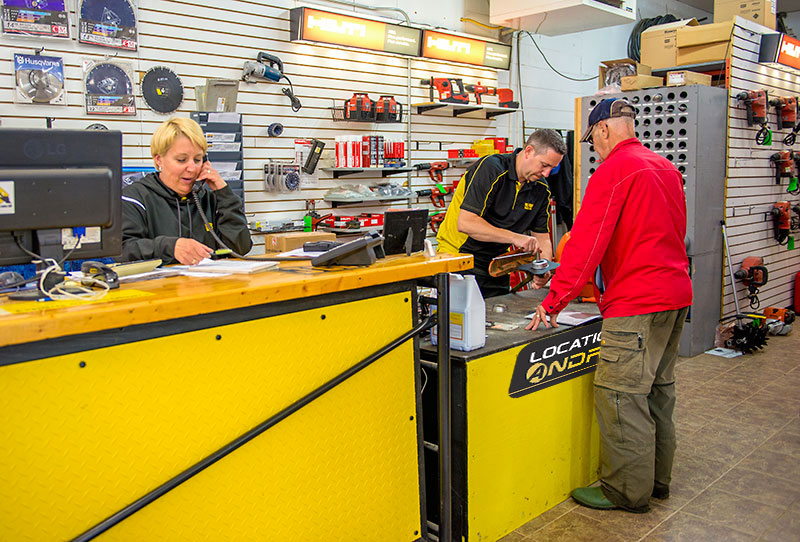 When Pierre-André Paquette became the owner of Location André in 2005, the company was already well rooted in Vaudreuil-Dorion. With its dynamism and boundless passion, the new owner, brought a wind of change, giving new life to the rental, sale and tool repair.

Since 2005, he moved the rental center in a bigger store in Vaudreuil-Dorion. Later, in 2009, he proceeded to the opening of a new branch in Saint-Lazare to better meet the growing demand of the population of Vaudreuil-Soulanges and surrounding areas. Over the years, Pierre-André Paquette and his team doubled their efforts to develop the industrial division of the business (rental and sale of boom lifts and heavy equipment). They will also seek to integrate retail sale, banking on reputable suppliers of high quality: Honda, Stihl, Hilti, Mikasa and Wacker Neuson.

Location André is a family business. Julie Gauthier, the spouse of Pierre-André Paquette, works as a rental adviser. Their son Simon-Pierre also works at the company during summertime. The twenty on-site employees work as a large family, offering a warm and friendly service to every customer.

Location André has the wind in its sails! Its owner, Pierre-André Paquette, recently acquired a hardware store located in Les Cèdres and has re-opened it under the banner BMR Express. This local business is situated in the heart of the village and offers the design of old general stores with the same warm and friendly service. This hardware store offers lightweight tool rental for all your small residential projects. A must see! The all-new BMR Express Hardware store is located at 1242, Chemin du Fleuve in Les Cèdres.